Our doors are still open although the impact of COVID-19 may alter our hours, our production and manufacturing lead times. Current lead time on new canopies is 8 weeks.
We APPRECIATE our customers who are CONTINUING to shop and support our family-owned business.

Our Pro Base Package is a great model. It’s everything you need to get started. You can customize now or add accessories down the road. Ships in 8 weeks! Shop Now. 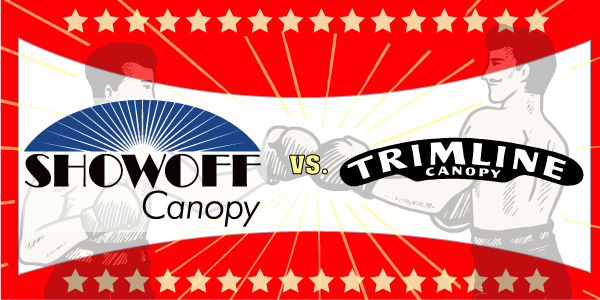 They welcomed the comparison; we took them up on the offer.

They welcomed the comparison; we took them up on the offer.

TrimLine Canopy’s old slogan used to be “We welcome comparison.” It took us a few years, but we are finally responding to its proposal. We know we aren’t exactly a disinterested party, but we think facts speak for themselves. So without further ado, we bring you the full head-to-head bout: SHOWOFF Canopy versus TrimLine Canopy.

A popular competitor of ours, TrimLine is produced by a company called Flourish. It has been producing art canopies since 1985 and the TrimLine since 1997. The design of the TrimLine has pretty much stayed the same for the last 18 years except the addition of telescoping legs in 2008.

SHOWOFF canopies hit the market in 1990, but our family has been fabricating awnings and canopies for commercial purposes since 1985. Its design has been more evolutionary than revolutionary, with the original design still in place today, but many custom options having been added over the years.

Both the standard TrimLine and SHOWOFF are dome-topped canopies. This gives them an airy, open, and spacious feel compared to other art tents with conical tops. The TrimLine comes standard with a wide skylight that runs down the center of the canopy and two heat–wind vents at either gable. Here at SHOWOFF, we recognize each artist prefers an art canopy tailored to his or her preferences, so we leave these as options. The SHOWOFF does offer center zippers on its front and back walls and free carrying bags, options on the TrimLine.

Accessories for either include awnings, stabilizer bars, weights, banners, display panels, etc. One of the more important options offered only on the SHOWOFF is the adjustable rafters. They can divert rainwater to the sides and away from the entrance, a major benefit for show-goers when it rains and a great reason for many to huddle in your tent and browse the merchandise during inclement weather. 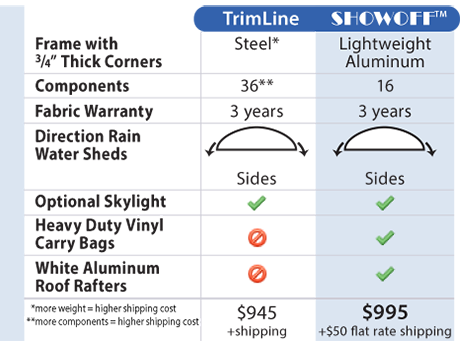 The ease of setup is one area where the SHOWOFF shines. Sixteen major components compose the frame. The TrimLine is more than double that number with 36 major frame components. The SHOWOFF’s components also weigh less. Made out of lightweight yet heavy-gauge aluminum throughout, the SHOWOFF canopy weighs 70 pounds altogether. The TrimLine, on the other hand, uses steel. Steel is approximately 2 1/2 times denser than steel, and it shows with the weight of the TrimLine canopy, which is approximately 130 pounds despite using weaker polyvinyl chloride (PVC) for its roof rafters. Even the instructional video for the TrimLine canopy shows how owners will probably have to ask for help during the latter steps of the setup process. 50-year-old women, meanwhile, have said that they can carry and set up a SHOWOFF canopy single-handedly.

The Trimline and SHOWOFF tops are assembled on the ground and then raised up.

The TrimLine and SHOWOFF stand out among cheaper competitors at big-box retailers for their quality materials and overall durability. A few weeks ago, we told you how a SHOWOFF survived a tropical storm, and we think it is testament to the durability of the SHOWOFF.

Another factor is the type of metals being utilized by each. Aluminum is naturally corrosion-resistant. (i.e., It won’t rust.) Galvanized steel is more resilient than carbon steel but still needs to be treated to protect against corrosion, and time, rain, and salty air will wear on any steel finish, leaving it susceptible to rusting.

One-hundred dollars is all the stands between the base TrimLine and the SHOWOFF, but SHOWOFF ships for free, making the SHOWOFF closer to the price of the TrimLine, if not cheaper. Although the cost of shipping the TrimLine will depend on where you live, we can’t imagine the TimLine—with its 36 major frame components and steel construction—will ship cheaply.

The SHOWOFF offers a lightweight yet durable all-aluminum frame that comprises fewer components, is corrosion-resistant, comes with 10 years of warranty assurance, and is easier to set up. Combine this with the optional rain-diverting roof rafters, free shipping, and a number of ways to customize, and we firmly believe this makes the SHOWOFF better than the TrimLine in the art display and tent marketplace.